By an act of the Pennsylvania Legislature, of April 19, 1844, John Wily, Robert Mitchell, Jesse Beaver, Thomas Cochran, and Michael Steever were appointed commissioners to lay out a state road from Reider's Ferry (now Newport) to the west end of Millerstown bridge, by the nearest and best route between those points. When Carroll Township was laid out in 1843 part of the boundary was described as being "along the great road leading to Clark's Ferry," which shows it as a then important highway. Its route lay through Grier's Point and Wheatfield Township.

The First Map below is Carroll Township Today.

A Second of Map Carroll Township dated  1877, a more detailed history of the township follows the map.

A third document following the second map describes a brief history of townships in Pennsylvania. 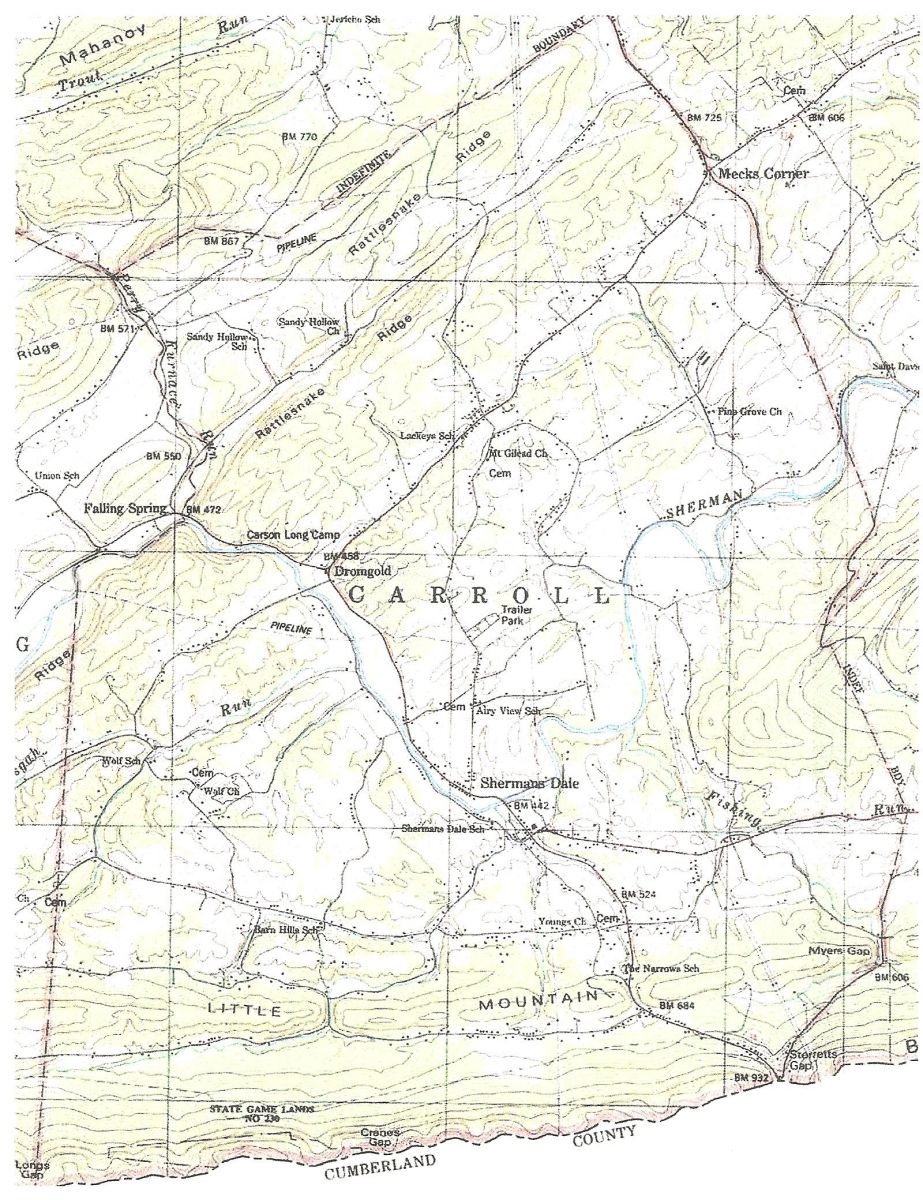 More Detailed History and current information on Carroll Township Perry County Pennsylvania
Compiled by Bill Richey from various historical sources , information obtained from my mother Annie Kitner Richey, and my personal experiences.                                           01/30/2013
In the beginning
In  1754, Tyrone Township Cumberland County  comprised all of what would become Perry County, west of the Juniata River.  In 1820, Perry Co. was formed from seven Cumberland Co. townships, namely:  Buffalo, Greenwood, Juniata, Rye, Saville, Tyrone, and Toboyne.  The townships west of the Juniata River that exist today were carved out of the original Tyrone Township.
A petition signed by 168 citizens of the district that would comprise  Carroll Township was presented to the courts in April of 1834. It would be the eleventh township to be formed in Perry County.  Carroll Township would be partially comprised of what was then  Tyrone, Wheatfield and Rye Townships.  Later, an initial part of Carroll Township was taken to form Spring Township . Carroll Township was officially recorded in April 1834.
Transportation
In the early days there were several well traveled roads and paths that found their way through Carroll Township. An old Indian trail crossed Carroll  Township at Cougan’s Gap (now Sterrett’s Gap) and wended its way westward along Sherman’s Creek, past Gibsons Rock to the Tuscarora Mountain to the west. The Cranes Gap Road was a footpath across the mountain at an early date, and in 1848 was made into a road. Cranes Gap was several miles west of Sterret’s Gap and joined what is now Fox Hollow Road.  About a mile west of Crane’s Cap was another gap known as Sharon’s Gap. Both Crane’s Gap and Sharon’s Gap roads were abandoned in the early 1900’s .  In the early days the roads through Carroll Township were well traveled routes as horse drawn wagons from Newport, New Bloomfield, Landisburg, and Duncannon used this route to Carlisle. The building of a canal and the Pennsylvania Railroad and the Newport - Shermans Valley Railroad cut off much of this early traffic;  but, the coming of the automobile and heavy trucks has again brought much traffic through Carroll Township and Shermans Dale.
Post Offices
There existed several post offices in Carroll Township.The original was at Sterett’s Gap. The original name of Shermans Dale was Smileytown. It was located on lands warrented by William Smiley in 1755.. The post office at Sterrett’s Gap was moved to this location in 1850 and the name was changed to Shermans Dale as there was already a post office named Smileytown elsewhere in Pennsylvania.
Business  and Industry.
In the early to mid 20th century,  Carroll Township was comprised of many small family owned farms with a small industrial base to support these farms. In fact, this writer spent several years as a child during the WWII period living on what was the Daniel  Kitner  Sr. farm (and later the Harry Kitner farm)  that was located on what is now the Texas Eastern Gas Compressor Station on Texas Eastern Road. There also existed at this same time period several family owned sawmills that supplied railroad ties and other lumber to the railroads and builders in surrounding counties.  I also remember from the  late 1940s until the early 1970s  of at least 6 or 7 family owned and operated service stations/gas stations/convenience stores  that existed from Mecks Corner to the top of Sterret’s Gap on Spring Road (Pa. Route 34). Carroll Township and Shermans Dale were beginning to gain population and a house building boom began in the mid/ late 1950s, so much so that a dedicated fire company was established several years before.  In the last 30 years or so, many of the small businesses evolved  from these early ventures into larger and more diverse businesses and now exist  to serve the needs of the citizens of Carroll Township and the surrounding communities. Except for these evolved businesses, Carroll Township today is also a bedroom  community to large employers in Cumberland, Dauphin, and York Counties
Education
From the early 1800s through the mid 1950s, there continuously existed  eleven  one-room country schools in Carroll Township. There were additional schools that were located throughout the township at various time periods but these schools were only used for short periods of time. These eleven schools provided primary education to the children of Carroll Township. Some of these buildings still exist today. The schools were Sandy Hollow , Huston, Lackey’s, Pleasant Grove, Wolfs, Airy View(sometimes called Windy Hill), Shermans Dale, Pine Hill, Bern hill, Fox Hollow, and Narrows. All of these schools were used ( except Pine Hill, Hustons, and Fox Hollow)  when Perry County consolidated their schools in January 1954. This writer attended two of these schools at different times, Airy View (1945-47)and Pleasant Grove (1953). In January 1954,  Carroll Elementary opened and replaced all of these one-room schools.

Churches and houses of worship.
Carroll Township  had many churches during the period from 1834 through the mid 1900s.  The denominations represented by these churches were Prespertirian, German Reformed, Lutheran,  Evangelcal United Brethren, Methodist and Church of God. In the late 1960s,  some churches began to merge.  (i.e. Evangelical United Brethern and the Medhodist Churches in 1968) and new congregations were formed and new churches were built. Some of the older churches, such as the Sandy Hollow Church, were torn down.  Those thatl still exist today include Mt, Gilead UM, Shermans Dale UM, and Youngs UM . Some of the newer churches in Carroll Township are Seventh Day Adventist,  Perry Alliance Church and the Grace Church.

Parks and Recreation
In the early years,  Carroll Township had limited recreation opportunities.. These primarily consisted of church social meetings, hunting, and square dancing. At one time there was a large building located on what is now Valley Road (Rt 850). This building site was used for things like Halloween Parties, Dances, and other similar functions. This building was vacant subsequently reconstructed as a  home. Around 1900-10 there was a camp ground located near the north west corner of what is now Spring Road and sandy Hollow Road, it was referred to as the Brunner Camp ground , after the name of the family that owned the property, I am not sure when this facility went out of existence. Some  time in the mid 1900s  a local family created a recreation facility and meeting  place that has evolved over the last half century.  It is now know as Lupfer’s Grove located on Spring Road (Rt. 34) in Shermans Dale.
Today Carroll has numerous recreation facilities , the Shermans  Dale Fire Hall, The Ambulance Building ( Both located on or near Spring Road), the Carroll Township Community Center located on Church Road . In addition to these facilities  The Lions Club Park  is used for both picnics, meetings, and athletic events. Carroll Township also has two parks one located on Burn Hill Road and the other located on Valley Road (Rt 850). The Burn Hill Park was initially started as a private endeavor using volunteers and has now owned by the township. The Valley Road Park is also owned by the township. Both of these facilities are operated through joint  cooperation of a   township appointed recreation board , volunteers and the athletic associations utilizing these facilities.
Carrroll  Township Government
Today Carroll Township is one of the fastest growing townships in Perry County. The township government is responsible for maintaining 64 miles of roadway. This includes paving, light construction, grass cutting, snow plowing , and other work related to taking care of the physical infrastructure. The township is also responsible for zoning,  issuing of building permits, approving land development plans, 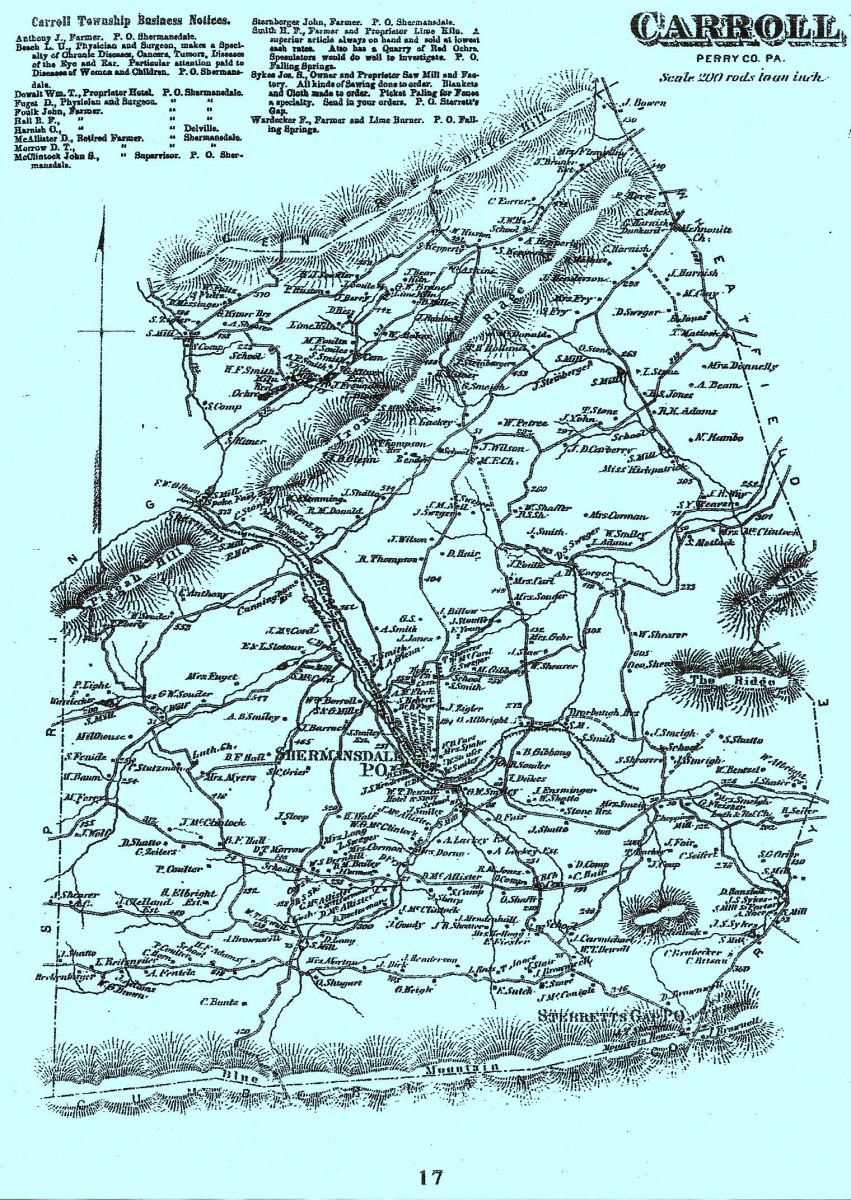 Carroll Township Perry County is a second Class Township under the Municipal Code of Pennsylvania.


A tale of two townships
Townships are the oldest form of organized government in the United States, dating back to

the 17th century. When the Pilgrims came to America from England, they brought the concept of

townships with them, and by order of the Mayflower Compact, townships became the first

political subdivision in the new world.

William Penn began establishing townships in Pennsylvania as early as 1683, with about 10

families to each. The Industrial Revolution brought more and more development to the state,

however, jeopardizing the existence of many townships. As growth intensified around cities and

boroughs, those municipalities began to annex the developed portions of adjacent townships

without the need for citizen approval.

In 1899, the legislature tried to address the dispersed growth by creating townships of the

first class as a special category. At that time, all townships with a population density greater than

300 people per square mile were designated as townships of the first class.

and gave townships of the first class greater power when dealing with growth. In 1937, they

to approve a referendum before a township of the first class could be annexed. Townships of the

second class were granted similar powers in the 1940s, although annexation continued to be a

came to annexation. Article IX, Section 8, which the voters approved in April 1968, required the

class township status, and these transition requirements remain the same today. To become a

township of the first class, townships of the second class must have a population density of at

least 300 people per square mile, and voters must approve the classification change in a

referendum. However, many townships of the second class meeting the density requirement have

Even though townships now consist of more than 10 families, they are still governed by a

of the residents. Today, the 1,456 townships of the second class represent more Pennsylvanians

than any other form of government consisting of approximately 5.4 million residents.

In townships of the second class, the governing body is composed of three supervisors who

are elected at large. Two additional supervisors may be elected if approved by the voters in a

referendum, and all are elected for six-year terms. Supervisors may also be employed by the

In townships of the first class, the governing body is made up of elected commissioners.

the township is divided into wards. The commissioners have four-year overlapping terms and

may not be employees of the township.

supervisors to carry out the policies and enforce the ordinances of the board, relieving the board